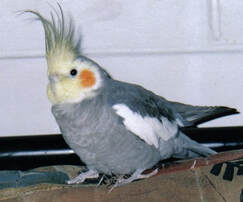 Eating is one of Charlie’s favourite occupations and we are not just talking bird food here! Charlie is an adventurous eater, and I am sure that food wise, he would have loved to be a human being.

I don’t think he would have made wise nor healthy choices would that have been the case! Charlie definitely has some issues to overcome when it comes to knowing when enough is enough.

His mentality is that of a wild animal in the jungle, fighting to survive, instead of a domesticated bird flying around in a living room.
This life for him is meant to be one of abundance in which he relaxes in the knowledge that there is enough for everyone.
Realising this will turn him into a softer and more generous version of himself.

So far, progress has been slow in this regard!

Even though Charlie is surrounded by other birds, his main connection is with his owner.
He is a bird who needs a lot of love and who gives a lot of love, and I don’t think he would have been as satisfied as he is now, if he didn’t have this special relationship.

He is much more in tune with his owner than he is with any of the birds. To be interested in forming a bond, he needs a more complex and intimate one-on-one relationship, like the one he enjoys with his human.

It almost feels as if he looks down on the uncomplicated pack mentality of the other birds, although he has no trouble being the leader of the pack.

He feels equal to his owner and he can be quite the jealous husband if he thinks any of the others receive more attention than he does. When it happens, he makes sure it is short lived!

The positive side of being so in tuned with his human, is that he easily picks up on her being down. He will do anything to cheer her up with his cheeky behaviour, and if his shenanigans and other mischief don’t work, he will take her mind off dark thoughts by damaging or destroying something!
​
I love how Charlie is living a purposeful life, and I am amazed to see how such a small creature has been able to establish a deep and loving relationship, using clear communication, sense of humour and a fair bit of self-importance!